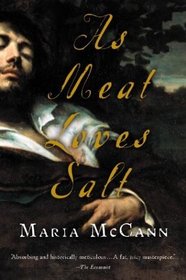 In what little spare time I’ve had during the past week, I’ve either been reading or thinking about Maria McCann’s As Meat Loves Salt. The wheels have been turning non-stop, trying to figure out how to describe this book, or why I liked it, or the secret to the hold it had on me. Honestly, I still don’t know what to think about it, but I do know that I can’t stop thinking about it either. And that, to me, is the sign of a good book.

The novel is set in seventeenth century England during the English Civil War and is narrated by Jacob Cullen, a man born free but forced into servitude as a child when his family fell on hard times. Jacob serves alongside his two brothers and is betrothed to a beautiful fellow servant, Caro. On the night of their wedding, Jacob is forced to flee his home (with his new bride and brother, Zeb) when a band of men descend on the property to arrest him for a heinous crime he had committed weeks earlier. Things do not go as planned and a weakened and disoriented Jacob is awoken on the road by Cromwell’s New Model Army, of which he becomes a member. It is here that he meets the disillusioned solder, Christopher Ferris, who nurses him back to health. Jacob falls in love and becomes obsessed with Ferris, unable to tell him no. As a result, Jacob finds himself devoting his time and energy into building the “New Jerusalem Colony” of Ferris’s dreams, even though he believes it to be a foolish and pointless venture.

There is soooo much to say about this book. Firstly, McCann is a genius with regards to bringing the past alive. Typically, I am a sucker for lush descriptions and details, but McCann manages to accomplish the same end without long-winded descriptions or minutia. She writes only what is necessary, and only what the narrator is registering and the result is an uncannily realistic backdrop. You understand the surroundings and feel them vividly, without being constantly reminded that it is over 300 years ago and very different from our current reality. I have often had a hard time “getting into” stories from this time period because (for whatever reason) it seems a period too distant or different to truly wrap my mind around, but I easily and fully grasped it here.

And then there is Jacob. Where to begin? To say he is complicated is quite an understatement. The back of the book describes him as “a man on the edge of madness,” but I would venture to say that he has already crossed that line and is officially mad throughout the entire book. He hears a “Voice,” which is generally nefarious, and shifts back and forth between a gentle giant and a ruthless savage.  He repeatedly commits terrible acts of rape and violence, yet feels guilty and ashamed after each one. He wants to be forgiven and seeks redemption, but always falls prey to his quick temper and deep-seated jealousy.  He is given countless second chances – which he did not deserve – and always fails to redeem himself. In today’s world, he would be committed as a schizophrenic psychopath and locked away for life.

It is clear from the beginning of the book that Jacob is capable of complicated deception and violence, and yet I was immediately invested in the character. I wanted to keep reading to see what he would do next, to see if he would ever learn from his mistakes or learn to master the prodding Voice in his head, knowing all the while that it wasn’t going to happen. For the most part, Jacob sees himself as unworthy of love and believes himself to be possessed by the Devil while simultaneously craving  love and adoration. Overall, he’s a despicable person, but as another testament to McCann’s writing, she hooks you into the life of this very unlovable person and makes you want good things to happen to him.

It only occurred to me today that this book is told from the villain’s point of view. Jacob is not a good person.  He is the rapist and the murderer that I usually hate vehemently in other novels, but was here essentially persuaded by brilliant storytelling to care for. It reminded me of Black Jack Randall and his need for domination, and how strongly I hated him for all his wrong-doings in Outlander, until I saw a different side of him in Dragonfly and found myself feeling sorry for him. (I saw other similarities to the Outlander series as well, particularly the difficulty in describing exactly what this book is about, as well as the realistic historical settings. If you are a Gabaldon fan, you will be prepared for the rapes scenes – think Wentworth prison – and details of battle violence found here.)

At the heart of the novel is the love story between Jacob and Ferris. It is a forbidden relationship during a time when homosexual activity was punishable by death. Ferris is Jacob’s opposite, he’s fair and slight whereas Jacob is dark and formidable. Ferris is tender-hearted and loving, while Jacob is selfish, uncaring and cruel. The way the relationship blooms and grows is seamless. You feel the tension between them and you feel their fear of being caught. There is a lot of sex, which is beautifully camouflaged and surprisingly graphic at the same time. There is no explicit or risqué terminology used, but you have no problem understanding what happens when “his blood is up.” While there is a lot (as much as you would find in a standard romance novel), it doesn’t seem excessive and feels completely natural to the flow of the story.

If you enjoy historical fiction and don’t mind going out on a limb for something different, I highly recommend this book. It is hard to put my finger on what makes it so special, and I realize that it’s a hard sell to convince people to devote a substantial chunk of their time (it’s a fat 500-some pages) to a relentless psycho, but I daresay you will be hooked. It’s not always palatable due to the violence and the narrator’s lack of empathy, but you will get sucked into McCann’s world. It’s going on my list of favorite historical fiction.