The Outlander Movie. Will this mythical creature that we’ve been hearing about for so long ever actually come to fruition? Or will it forever remain a phantom rumor mill floating about the interwebs, spawning YouTube fan videos until the end of time? From what I’ve gathered, Ann Peacock (screenwriter for The Chronicles of Narnia: The Lion, the Witch, and the Wardrobe and Nights in Rodanthe) is currently writing the screenplay and nothing else is set in stone.

I’ll be honest, I don’t think it’s ever going to happen, and that may be a good thing. I just don’t believe it is possible to convert this 800-some page novel into a quality 2 hour movie. I would much rather see it made into an HBO or Showtime series, with an entire season devoted to each book. That way, there would be plenty of time for character development and room for all those niggly little details that people like myself are surely to look for.

Yep, I’m one of those obnoxious people who craves a literal book-to-movie translation. I realize that the logistics of such a feat are nearly impossible, but I can’t help it; I want to hear the actors quoting directly from the book and I look for costumes and locations to be spot-on. Of course, that rarely happens and I usually end up driving my husband or fellow viewers crazy with constant jeers of “What?! That did NOT happen in the book!!” or “Arrrgg?! NO! He doesn’t do that in the book!”(You should hear me when we watch True Blood. And Twilight drove me absolutely batty.)

I realize that a movie is an interpretation of a book, and that most people don’t want to see the exact same thing on-screen as they saw in the book, because “where’s the fun in that?” as my husband would say. I can understand such logic and despite my complaints, nine times out of ten, I’m usually able to get past my prejudices and still enjoy the movie or TV show (True Blood, for example).

If I’m honest with myself, however short of my expectations the movie may fall (assuming it gets made), I will be powerless to the draw of seeing the embodiment of my favorite characters on the big screen. I will probably do a lot of criticizing and complaining, but I will not have the willpower to restrain myself from seeing it. (I saw Twilight three times in the theater…I claimed I didn’t like it, but clearly there was some discrepancy between my words and my actions…). Resistance will be futile. And doubtless, there will be girlie squeals.

Now, onto casting. (Keep in mind that I do this all in good fun.) You all know that I love Alexander Skarsgard as Jamie Fraser, but he’s really too old to play the young Jamie from book 1. My mental images of the characters have actually grown and changed as the books have progressed, so I now find it a little odd to think about Jamie as a 23-year-old, since he’s currently 50-something in my mind. Also, of course, no actual person in existence looks like Jamie Fraser. No one could possibly live up to such a namesake! I think The Lit Connection summed up this conundrum perfectly when she said “If I ever set eyes on Jamie Fraser in real life, I think I’ll go blind…much like someone will go blind staring at the sun.”

Okay, that having been said, I have a possible casting idea for 23-year-old Jamie a la Outlander: Ben Barnes. 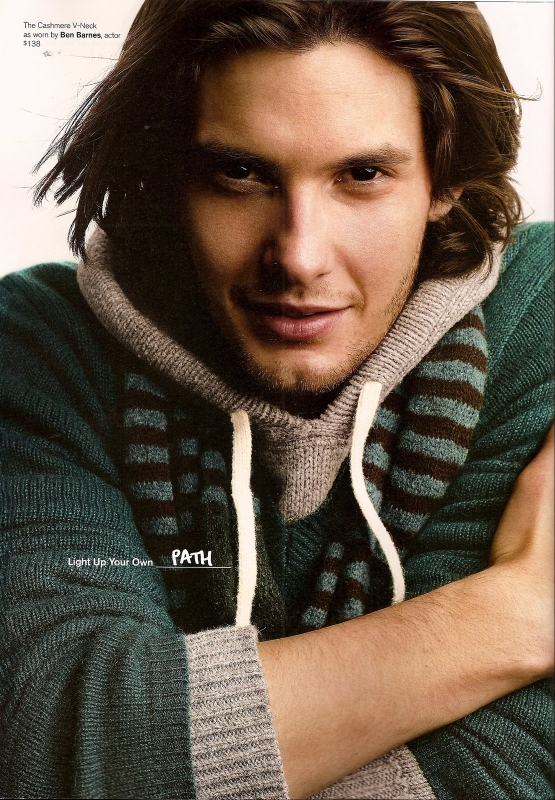 I must give my friend Carla credit for this idea; and when she brought it to my attention several months ago, I didn’t see it. Granted, I thought he was very attractive, but I just couldn’t see him as Jamie. She recommended that I watch the movie Dorian Gray, in which he plays the lead role, since it was the movie that first gave her the idea that he could play the part. I finally got around to watching Dorian Gray a few weeks ago, and I’ve got to say, it turned me around too.

Here is Ben’s credentials: He played Prince Caspian in The Chronicles of Narnia, so he knows how to wield a sword and ride a horse. He’s British, speaks moderate French, and has mastered the Scots accent. Physically, he’s got the slanted “cat eyes” that are so characteristic of Mr. Fraser and he looks good with long hair. One of the sex scenes in Dorian Gray leads me to believe that he could easily pull off a kilt.

Now, he obviously doesn’t have the correct coloration, but I’ve seen poorly photoshopped pics of him with blond hair and blue eyes – and it works – so I think a darker shade of red would look great on him. (Although I do think it a shame to change his natural eye color because those dark, smoldering eyes are so verra nice as is…) He is long and lean, but would definitely need to hit the gym to add some muscle since he’s quite thin. Remember, Diana G has said that Jamie is built like a basketball player, not a football player.

I have only seen the first Narnia and don’t recall Mr. Barnes, (I only remember my bitter disappointment that James McAvoy was playing the goat-man) but he’s inspired me to watch the entire series soon. In Dorian Gray, however, Ben Barnes carries the film and is flat-out gorgeous in every scene. He’s also in a movie called Easy Virtue (which I haven’t seen yet, but is on my Netflix queue as well). He’s a relative newcomer and I would argue that he’s not well-known, so that adds to my appeal, since I think it would be a shame to use big name actors in the Outlander movie (they just seem to get in the way, don’t you think?). 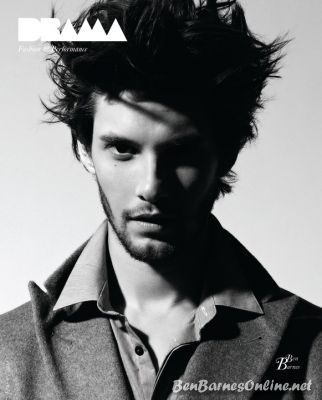 Jamie's always running his hands through his hair, making it stand on end...yes?

Oh, and here’s some trivia that is completely irrelevant to the discussion at hand: he was 1 of 4 finalists for the role of Edward Cullen! I found that very interesting, and I think he would make a wonderful vampire (and I daresay he would be a much better actor than our beloved Rob Pattinson).

Anyhoo, I know Ben Barnes is a wild card and a total shot in the dark, but I do think he could play our 20-something Jamie (with a little prep) in an adaptation of Outlander and Dragonfly in Amber. Have I convinced you likewise? What do you think? I’m very interested to hear your opinions! Hey, if nothing else, I’ve given you some pretty pictures to look at, right? ;) And thanks again, Carla!

74 comments on “Casting Jamie Fraser in the Outlander Movie”