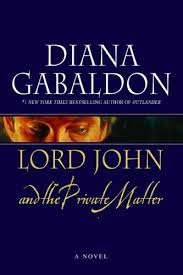 Overall, they were okay. Pretty solid, as my brother would say. (I found these books to be much like every Kings of Leon song I’ve ever heard: they start out with a lot of  promise, but never really seem to go anywhere. I hope that wasn’t too snarky? I still love you, Diana G!) On the bright side however, I did develop a definite attachment to Lord John, whom I had always been fairly indifferent towards while reading the Outlander novels, as well as a concrete image of what I think he would look like.

Lord John and the Private Matter begins with LJ accidentally catching a glimpse of what appears to be a pox mark on the manparts of his cousin’s fiance. LJ feels that it’s his duty as an honorable man to do some sleuthing to determine the true character of said fiance in enough time to cancel the wedding. The premise makes me giggle, but I kind of had to force myself to get through this one, and truthfully, I can’t even remember much of what happened. I kept waiting for some juicy Jamie bits, but alas, there wasna any. I did enjoy learning about the mollyhouses and I love Tom Byrd to death, but I don’t really feel that this book is critical to the series. 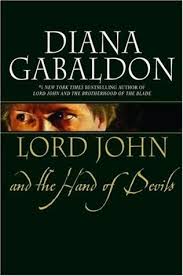 Lord John and the Hand of Devils is a collection of 3 novellas that each have a supernatural twist, and it turned out to be a great book to kick off the start of October. I actually really enjoyed these short stories, Lord John and the Hellfire Club being my favorite…very, very strange…but strange in a good way. I suppose my overall favorite however is Lord John and the Brotherhood of the Blade. It’s by far the most substantial of the 3 books (around 500 pages) and I felt that I got the most out of it (a.k.a. it has juicy Jamie bits), and that’s what I’m going to focus on here.

It’s the heart of the Seven Years War and someone is sending pages from the diary of  Lord John’s deceased father to members of his family. His father, the Duke of Pardloe, is believed to have committed suicide after being accused as a Jacobite agent when LJ was a boy.  John has harbored a secret regarding his father’s death for many years and now wants to clear his good name, as well as recover the missing diary. Meanwhile, his mother is preparing to wed General Stanley and John is introduced to his soon-to-be step-brother (and so much more), Percy Wainwright. John and Percy have a bit of an awkward “introduction” since they have met once before during a mollyhouse one night stand (in the Private Matter). Percy joins the army and they begin a passionate affair that lasts throughout the majority of the book until John (and several other army officers) accidentally catch Percy with another man. LJ is then faced with a moral dilemma: to testify to what he saw and potentially sentence Percy to death, or lie in court and free Percy, but put an end to his own good word. The timeframe of the novel coincides with Voyager, when Jamie is working as a groom at Helwater. Lord John receives notice that his beloved friend Geneva Dunsany has died and leaves at once to help console the family, thus seeing Jamie Fraser in the first of many visits throughout the book.

I found it very interesting to see the other side of the Dunsany/Helwater debacle from John’s perspective. Grey had known the Dunsany’s since the early days of his commission, where he became good friends with their son, Gordon. Gordon was killed during the Jacobite Rising and as a result, the family adopted Grey as a sort of foster son. John had known Geneva from the time she was 4 or 5 and Isobel since birth. There is a touching scene where John comes across a rain-soaked and grief-striken Isobel preparing to jump out of the window. He pulls her down and in an attempt to comfort her, confesses that he took to smashing things while mourning his father. He gathers some objects for her to throw out the window and offers to take her out to shoot clay pigeons. It was a very sweet scene, especially knowing  that they would end up as husband and wife. (I would love to hear Isobel’s thoughts on that marriage.)

On the night before the funeral, John walks to the family chapel to sit with Geneva’s body one last time before she is buried. Upon entering the room, he is shocked to find Jamie lying on the freezing floor, in nothing but his shirt, keeping watch. Jamie sounds like he has been crying and John realizes that he must have been performing an act of penance, which leads him to believe they were lovers. (LJ later pays a visit to the new Earl, expecting to find a head full of tell-tale red hair.) Jamie serves as a pallbearer to the Earl of Ellesmere at the joint funeral (scandalous!) and apparently the other manservanst are fearful of him. He sits completely alone while most of the congregation openly gawk at him. John is keeping a careful watch on him as well, and notices that Jamie is clearly showing signs of distress during the funeral, and he wonders if it’s Geneva that he is mourning, or his dead wife.

Later, while still attempting to clear his father’s name, John offers to release Fraser from the provision of his parole if he can provide names of the prominent Jacobites from England during 1741. Jamie becomes very agitated when LJ mentions that he needs the information in defense of his father’s honor, and goes on to give this chilling speech:

I am not merely defeated, nor only imprisoned by right of conquest. I am exiled, and made slave to an English lord, forced to do the will of my captors. And each day, I rise with the thought of my perished brothers, my men taken from my care and thrown to the mercies of sea and savages – and I lay myself down at night knowing that I am preserved from death only by the accident that my body rouses your unholy lust. 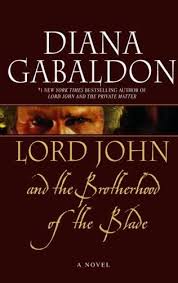 One thing that I found a little confusing was the dynamic of Jamie and John’s relationship. Based on Voyager, I had the impression the two had grown to be good friends as a result of spending so much time dining together at Ardsmuir. In Brotherhood of the Blade, however, I felt like Jamie was consistently hostile and unfriendly towards John; and at times, I got the impression that perhaps John felt more lust than actual love for Jamie.

It was very intriguing, albeit a little strange, to see Jamie through a different set of eyes (other than Claire). For example, check out LJ’s description of Mr. Fraser upon first approaching Helwater…

The lines of neck and spine, the solid curve of buttock and columned thigh, the sun-darkened flesh of his throat, sun-bleached hair of his arms- even the small imperfections, the scars that marred one hand, the pockmark at the corner of his mouth- and the slanted eyes, dark with hostility and wariness. It was perhaps no surprise that he should feel physical arousal; the man was beautiful, and yet dangerous in his beauty.

I don’t remember Claire mentioning any pockmarks, but I can definitely appreciate a fresh take such as that. Basically, Jamie is the center of John’s world.  Oddly enough, instead of this making me angry (like it did in Voyager– I suppose it was the idea that John was potentially competition, or maybe just a major complication, for Claire?) it actually just strengthened my notion of the love between Jamie and Claire. I realized that Jamie always had eyes for only Claire, and that Lord John was fully aware of this.

There is one scene in the book that does sort of bother me though. It’s towards the end, when John is desperately torn about what to do during Percy’s impending court date. John travels back to Helwater specifically to consult with Jamie to get the counsel of a truly honest man (Grey also says that Jamie is the only person in the world to whom he can speak frankly). Grey admits that he cannot see Percy hanged for a crime whose guilt he shares. At this, Jamie refers to Percy as Grey’s “catamite” and implies that John is preying on young boys. Tempers flare rapidly and a heated argument ensues about whether or not men can love one another (Jamie saying the thought of it “curdles my wame”), the climax of which occurs when the following exchange takes place:

Jamie: “Draw on me and be damned, armed or no, ye canna master me.”

(Yowza!! My jaw totally dropped at that one!) Anyhoo, what happens next is very vague, but basically Jamie throws a punch, John is disoriented and stumbles out of the barn (they were in the barn because Jamie always seems to be pitching hay in this book), ripping at his flies…next thing you know, “desperate fisting” ensues and a “drained” John sinks to his knees. I realize there are a multitude of reasons why this scene should be vague, but I have a lot of questions, the most significant being whether or not Jamie witnessed what was taking place?! It only seems logical to me that if he was in the midst of a fight, and his opponent walked away, he would at least watch to see what his next move would be, right? I would like to think that Jamie wouldn’t have stayed to watch the public indecency take place, but he had to have known what was going on? It was crazy, to be sure.

So, in summary, I am glad that I took the time to read this series and I definitely have a new-found appreciation for Lord John Grey. I officially like him now. While I pretty much just covered all the parts involving Jamie, I would recommend that any Outlander fans should at least read Lord John and the Brotherhood of the Blade. I heard that Diana G is writing a new story involving Lord John and zombies and I’m actually most excited to get my hands on that!

5 comments on “The Lord John Series by Diana Gabaldon”