On New Year’s Eve of this past year, my cousin and his fiance secretly went to the courthouse and got married. To inform everyone of their clandestine nuptials, they sent out a text message containing an adorable, old school photo of them at the courthouse holding their marriage certificate and grinning from ear to ear. It was simple and romantic. It didn’t take long however, for the family to start planning a party and much to my surprise, I was asked to be the photographer for the event. It was hard not to say no, but it had been years since I had done any creative photography. Alas, I ponied up to the challenge, roped my husband into being my dubious assistant, and prayed for at least a few good shots.

I arrived back home the night before the event, and in the midst of hectic last-minute decorating and running around, we managed to  hatch out a rough plan and recruit my brother and remaining cousins as drivers and assistants. Since the plan began at 9am the next morning, said newly acquired assistants (as well as my husband and the new groom) were not too enthused about the prospects of getting up so early and spending the entire day outside in the 90 degree heat; but despite some initial grouchiness, we all came together and (at least as far as I’m concerned) had a fantastic day and landed some equally fabulous photos to show for it.

There was a beautiful old barn on the property that we believed to be empty and unused. After lots of scouting, this was the location I was most excited about. We had begun shooting and things were moving along seamlessly, when all of a sudden, a gorgeous white horse appeared out of nowhere and stepped into our photo! I was initially startled, but hastily started snapping away to take advantage of this stroke of good fortune.  It was a memorable moment that felt magical, if not a bit eerie, and symbolic all at once.  In the end, we got more than just a few good photos and naturally, those featuring the mysterious white horse turned out to be everyone’s favorite. I do love a good dose of serendipity. :) 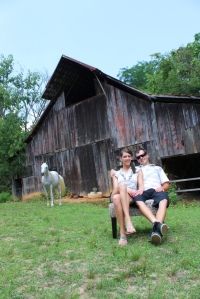